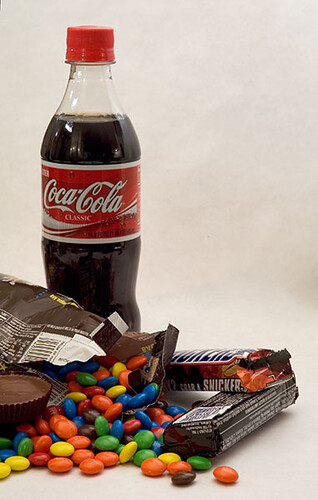 That was my comment to a mother who asked me for advice on getting her overweight teenager to quit eating junk food, the same food the mother is used to buying for her every week.

This mother obviously loves her child and wants her teen to be in good health; she always has plenty of healthy items, like fresh fruit and vegetables, readily available.  But, she also doesn’t want her daughter to feel deprived, which is why she buys the junk food. She has heard me say repeatedly, “If you don’t buy it, then you can’t eat it.” But it’s much easier said than done, according to this mom.  She feels that she has to buy the few items of junk food, it’s too difficult not to.

Once she purchases these items, takes them home and puts the items in the cupboards, she hopes to have the ability to control her teenager’s food cravings.  Unfortunately, I know that won’t work because I was that same teenager who wanted all the unhealthy goodies too.  Sure, there were all kinds of veggies and fruit in our kitchen, but if there was a bag of salty snacks in the cupboard, those were mine.  I was in my own little heaven as I ate them all.

She was confused and wondered why when she tells her daughter to only take a small bowl of the goodies she gets immediately offended and will take the entire bag to consume.  Even if she tries to make it easier for her teen to eat appropriate portions by purchasing the ‘single serving sized’ bags, it doesn’t work.  The teenager will just eat several bags; it’s her daughter’s habit to consume large amounts of junk food.  What to do?

There’s not just one perfect answer here as we know that every person and every situation is different.   When this mom says that she can’t possibly go to the store without buying at least a few junk food items, it basically means to me that she has created a habit for herself.  Habits are hard to break; if they weren’t then this would be a more picture-perfect world.

Just because habits are hard to break does not mean that they can’t be broken.  It takes determination and willpower to break an unhealthy habit, and it doesn’t happen overnight.  Ending unhealthy habits such as smoking, excessive drinking, or overeating are often quite difficult to do.  But we all know people who have conquered these habits, right?  It is possible and it can be done!

When a person loves food like I did, when the food they crave is in the house and readily available, those foods will be consumed. It actually makes a person who loves to eat want to “eat more” when they are told that they should not eat something. This is especially true if the person eating the food doesn’t have any desire to end their habit, but they are forced to do so by a loved one.

If a person wants to end an unhealthy habit on their own, purchasing the item that they are addicted to and placing it in front of them makes it hard to ignore.  If you remove the item causing temptation, it makes it easier for the person to end the habit.

Obviously when this mother is shopping at the grocery store, the tempting junk food is everywhere. She can first start changing her habit by not reaching for any junk food items.  If she doesn’t reach for them, she can’t place the items in the cart.  If they aren’t in the cart, she won’t buy them and take them home for the child to view.   This may not be easy, the teenager may become irritated, but that’s okay.   What this mom is doing is creating a healthier environment for the family.  It’s also showing that she is willing to focus on the difficult task of changing her own habits … and most likely will understand how difficult it is for her teenager to change hers.

It’s not easy, but it can be done!  Start today and begin the process.