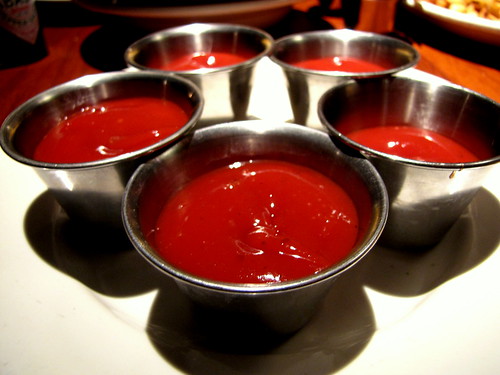 Whether it’s being spread on a hotdog, splattered over a plate of French fries or spooned onto your mom’s homemade meatloaf, ketchup has become such a staple of the American diet that it’s earned its own day. That’s right, today is National Ketchup Day!

Heinz ketchup is arguably the most popular and consistent condiment gracing the tables, refrigerators, restaurants, and picnic baskets of Americans, but that hasn’t always been the case. When H.J. Heinz first began bottling and selling condiments in his home in Pennsylvania in 1869, he started with horseradish, sauerkraut, vinegar, and pickles.  In 1876 ketchup made its official debut, and in 1937 Heinz took production to a factory in Fremont, Ohio, which currently produces 34 million cases of ketchup annually. Today, Heinz is selling 650 million bottles of ketchup a year world-wide, which shakes out to roughly two single serving packets to every person on the planet.

While ketchup is universally known to be a catch-call condiment that goes well with almost everything, health professionals stress moderation because of its sodium and high fructose corn syrup content. A registered dietician for Parentables lists some healthy alternatives to what she considers “a junk food”, largely due to the portion sizes in which it’s often used. Mustard, low-fat Ranch dressing, hummus, low-fat mayo, salsa, and yogurt-based sauces like tiziki are all lower in sugar and salt than ketchup, and as a result are a better choice for your regular spreads and schmears.

But just for today, on its own holiday, shake the bottle and then squeeze it onto whatever you’d like. Don’t worry, we won’t tell.

ABOUT THE AUTHOR
Stephanie Shenouda

I'm a rising sophomore at the University of Michigan in Ann Arbor with an intended dual degree in policy and writing. I'm a lifelong competitive figure skater and aspiring journalist with the Michigan Daily. When I'm not busy I enjoy reading fashion blogs, sipping iced coffee, and shopping for uncomfortable-looking shoes.
See all of my posts