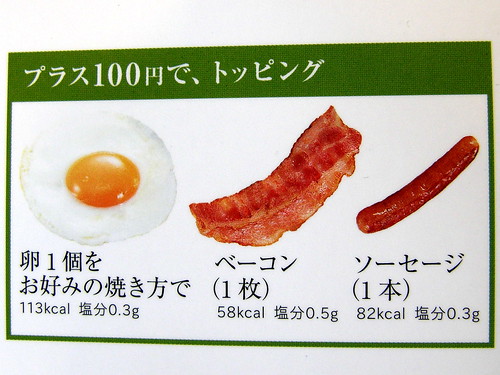 I’ll never forget the day I looked at the first menu that included the calorie count for the menu items. I was walking in New York’s Rockefeller Plaza as I tried to calm down a little bit after a morning spent in front of the cameras on NBC’s Today Show and looking for a simple, healthy lunch item. Everything was new to me, since I’d never been in New York City before, so when I noticed the large menu board with the calorie count for a popular food chain, it was one of those moments that was peculiar enough to stop me in my tracks. My first thought was, “How awesome is this? I can’t believe it… they actually list the calories for each item sold, even the water!” I realized that I should probably take a photo since I figured that most people wouldn’t believe me back in Michigan.

Then I started looking for these menu boards wherever I went, and of course, they were everywhere. I didn’t realize that during the spring of 2008, the Big Apple became the first city in the country to implement a law forcing chain restaurants to post the calorie count of each food in the same size and font as the price. I was extremely pleased to learn of this new law, but not so happy when I realized it wasn’t implemented in my own state.

Well, guess what? There have been some changes here since then. It may have taken a few years, but I’m not complaining!

According to an article in the Lansing State Journal (thank you, Jon Stanton, for bringing this to my attention), as part of the recent federal health care overhaul, the Food and Drug Administration is expected to roll out national rules by year end requiring any chain with 20 or more locations to post calorie counts for every item they sell. Did you see that? A calorie count for every item they sell!

We will finally know how many calories are in that morning 8-ounce caramel cappuccino, the daily lunchtime chef salad, the afternoon smoothie treat, and the fast-food dinner items that are often consumed by millions who assume they are eating slightly healthy because they contain some form of vegetable. I have a feeling that there are going to be some big changes, both in the restaurant industry and the choices made by consumers.

Chains are scrambling to rework consumer favorites so they have fewer calories, and they are redesigning menus so that high-calorie items are balanced out by more healthful options. All I can say to that is, “awesome!”

Everyone will now be able to know the calories they are consuming when they dine out or pick up some fast food — including the beverages. I’m hoping that people will begin making healthier choices, even if it’s simply ordering a glass of water instead of sugary soda with their meal. Simple changes like that can make a big difference. In fact, when NBC recapped my weight-loss success story, they made sure to mention just that.

We are heading in the right direction towards better health, that’s for sure!  Now if only we could implement a walk-thru window and put an end to the drive-thru… well, let’s just say a person can dream, right?