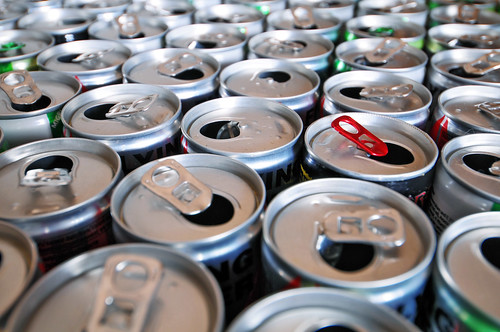 For the dedicated energy drinker, consuming highly caffeinated beverages is more than just “drinking” — it’s a way of life. The college student studying late at night uses energy drinks to keep himself awake. The drummer in a band uses them to get pumped up before a huge show. Even the worker in the corporate world finds them to be useful in making his work day more enjoyable. While energy drinks seem to be a great solution to fatigue, though, they have many associated health risks.

When I was younger, I was not a huge fan of overly caffeinated beverages; the smell was rancid and the taste made me cringe. I saw other people drinking them often and thought that if I just kept trying to enjoy them, I eventually would — and I turned out to be right.

After a great amount of time, I found myself loving the taste and even craving it. I liked the way energy drinks made me feel; it seemed as though I could accomplish so much more after having drunk just one. In the beginning of my energy drink journey, I placed them on a very high pedestal. However, as with everything that seems perfect, energy drinks have many negative consequences, which I quickly began to realize.

After drinking at least one energy drink a day, I began to notice changes in my body. My heart wasn’t behaving the way it normally did — it felt as though it was skipping every other beat. At first, it didn’t cross my mind that these weird sensations were being caused by my energy drinking habits. People drink them all the time without reporting any problems; I didn’t think there was any way that was happening to me.

As I began to drink them more frequently, though, the skipped-beat feeling worsened and became extremely bothersome. You know the feeling your stomach gets when you’re on a roller coaster? That dropping feeling is the one that I had in my heart; not painful, but breathtaking nonetheless.

I eventually discovered that the heart problems I was having were due to what are known as premature ventricular contractions, or PVCs. These heart arrhythmias cause the feeling of skipped heartbeats, but are actually extra electrical impulses coming from one of the cardiac ventricles. I learned that drinking a lot of caffeine can cause these, so I decided to cut energy drinks out of my diet altogether.

After I quit, my heartbeats eventually returned to normal, and I’m happy to say that I haven’t had any heart problems since.

While I did experience some health issues related to energy drinks, I was lucky that I didn’t come across anything serious. Some of the more dangerous problems associated with high caffeine intake include:

Some healthier alternatives to energy drinks are sodas and coffee, which still contain caffeine but in much smaller amounts. That being said, still be sure to use all caffeinated products in moderation.

What do you think about energy drinks and their impact on health?