A few weight-loss tips created for this darling dog: Obie the overweight Dachshund 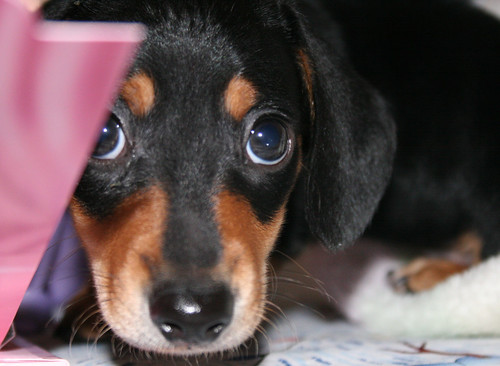 If you’ve been following the story of Obie the dachshund, you know this cute little guy has a bit of a weight problem.   Okay, it’s more than a bit of a problem.  Obie’s top weight was 77 pounds, which is twice as much as a dog of his breed should weigh.  I suppose that’s why this precious pooch has such a following of fans, everyone wants to see Obie successfully lose weight… and he has been!

Many pet owners don’t realize that dogs and cats can have severe weight issues just like humans can. Obesity in dogs and cats is associated with a number of serious health problems which include: diabetes, pancreatitis, joint disease, skin disease, a shorter lifespan and high fat levels in their blood.  That is one reason why Obie’s owner, Nora Vanatta, is happy that her dog’s story has been in the spotlight and is bringing public awareness to the health issues that obesity can create.   Nora hopes it will influence people to take better care of their pet’s health along with taking better care of their own as well.

Nora hasn’t always owned Obie the dachshund; she agreed to foster the 5-year-old dog before meeting Obie when she read a plea on a dachshund rescue Facebook page last month.  Her previous owners, who were aging with failing health, were showing Obie their love with food, and it’s pretty obvious that they loved their dog a lot.  “They just couldn’t say no to those big brown eyes.”  according to Nora.

Doesn’t that make you wonder how many parents do the same thing?  I’m not referring to pet owners, but parents doing this to their children?  They show their love with food, often unable to say no because of the love they have for their child.  It is harder yet when their child gives them “the look.”  It happened with me when one of my kids wanted a sugary goodie that they knew I would say no to.  They’d look at me with their big brown eyes and it was almost impossible to say no to them.

Obie is being fed a special diet that is low in fat and calories but high in protein and fiber, which will help burn calories and reduce his appetite.  This is surely one key factor for his weight loss, the other is the continuous effort that Nora is putting forth to get Obie to move a little bit more each day.   This darling doxie is surely shedding the pounds – about two pounds per week!

It’s pretty awesome to know that a dog can lose two pounds per week by eating the right foods along with getting a little exercise, which increases slowly as his weight decreases.  Having a “Biggest Loser, Doxie Edition” Facebook page doesn’t hurt either.  He is getting support by tens of thousands of people who care about his health and continuously follow his weight loss journey.

Maybe we can take away a few valuable lessons from this story concerning Obie the dachshund.  Don’t show your love with food, learn to say “no” to a request for food from a big eyed  being no matter how adorable they are, eat a diet that is low in fat and calories, consume more protein and fiber and move a little more each day.

It’s one step at a time for Obie.  With four little paws and an entire support team behind him, he’ll achieve his goal in no time!