Cheers for beers: a toast to good health 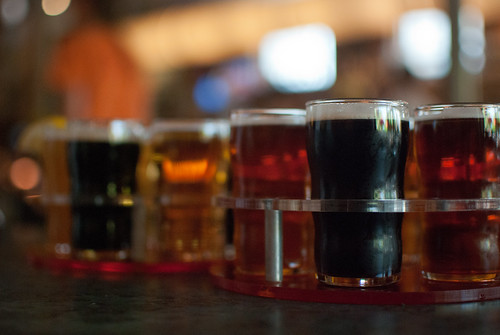 As the clock strikes midnight on January 1st, you may want to forgo the usual champagne toast and tip your glass to the New Year with a frothy mug of beer! Although wine often gets all the credit for being a heart-healthy “adult” libation, evidence is piling up in favor of beer for its own list of nutritional and health-promoting benefits. According to the Academy of Nutrition and Dietetics it is heart smart, kind to your kidneys, a surprising source of fiber, and can even strengthen your skeleton.

Heart
Experts agree that alcohol improves heart function by making the blood less sticky. By increasing the “good” HDL cholesterol and lowering the “bad” LDL cholesterol, alcohol decreases the likelihood of clots forming in the blood. In a 2008 issue, the Journal of the American Dietetic Association reported that people who drink one to two alcoholic drinks of any kind are less likely to suffer from heart disease.

Kidneys
When compared to other alcoholic beverages, researchers found that beer lowered the risk of kidney stones in men. The release of calcium from bone is largely implicated in kidney stone formation but compounds found in hops may slow down the process. Beer also has a high water content and a diuretic effect which helps keep the system flushed.

Fiber
The recommended daily amount of fiber is 25 grams for women and 38 grams for men. Although the USDA Nutrient Database lists beer’s fiber content as zero grams, recent studies have shown lager contains up to 2 grams of soluble fiber per liter, while dark beers can contain up to 3.5 grams. During the brewing process, barley is malted. This starch contains a type of soluble fiber known as beta-glucans which are recognized for improving heart health by lowering cholesterol levels.

Bones
Although heavy drinking can weaken bones, beer in moderation can make them stronger. According to a February 2010 study published in the Journal of the Science of Food and Agriculture, beer is a rich source of silicon, which increases bone density and may help fight osteoporosis. The study’s lead researcher shared that beers containing high levels of malted barley and hops are richest in silicon. In addition, those same compounds that slow down the release of calcium for prevention of kidney stones also help fight bone density deterioration!

There is no better place to enjoy a local brew than right here in Michigan! The Mitten State is fifth in the nation in the number of breweries, microbreweries and brewpubs. If you’re interested in “tapping” into the health benefits, check out a pre-arranged brewery tour  or plan a visit of your own using a breweries map .

If you don’t drink now, it’s not recommended that you start. If you do treat yourself to a regular brewski, remember to keep your intake moderate.  This means one 12oz beer for women and two for men daily. BEEResponsible and have a happy and healthy 2014!

ABOUT THE AUTHOR
Allyson Roelofs

Allyson is a Health Coach for Blue Cross Blue Shield of Michigan. She is also a dedicated Spartan, novice runner and aspiring Betty Crocker. She still bleeds green, 4 years after graduating from Michigan State University with a Bachelor of Science Degree in Dietetics. This year she advanced from power walker to jogger to runner and completed her first 5k in the Fall. Most nights of the week you will find her in the kitchen trying out a new recipe from one of many cookbooks housed on their very own shelf. No, the cookbooks are not leather bound and the shelf is not made of rich mahogany.
See all of my posts