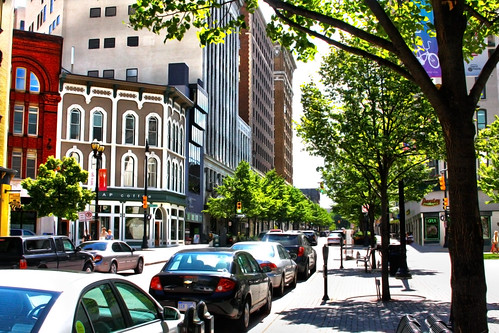 Preliminary findings from the Sustainable Streets Task Force state that by 2018, at least 90% of the roads in Grand Rapids will be in poor condition.  Additionally, approximately 371 miles of road out of 588 are in poor condition.

These are just some of the facts talked about in June’s installment of the monthly Not Your Average Speaker Series, hosted by Rapid Growth Media. The panel discussion, moderated by Christopher Wilson, featured representatives from the Task Force: Josh Leffingwell with Friendly Corps, Theresa Petko with URS, Suzanne Schulz with the City of Grand Rapids, and Kim Frost with Disability Advocates of Kent County.

For some background, the Sustainable Streets Task Force was put together by the Grand Rapids City Commission a little over a year ago. The team of 30 citizens represents leaders from different community groups around Grand Rapids. They were tasked with reviewing and updating infrastructure plans, creating a future vision for the role of streets and what condition the city should strive for, developing investment sources to help with the gap in funding, and suggesting plans for obtaining a sustainable street system.

The slew of said statistics are alarming given that by 2014, Grand Rapids will lose its funding for streets that are not considered to be main roads, like Alpine, Fulton, Pearl, Michigan, etc. To counteract this loss, approximately $22 million per year for at least the next 15 years is needed in order to get 70 percent of Grand Rapids streets in either good or fair condition. Additionally, the current funding sources are either declining or will become no longer available.

As the panel suggested, the Task Force has an overwhelming urgency in the matter because “the longer we wait, the more the roads deteriorate.” In fact, $1 million dollars will only fix one mile of road due to an increase in the cost of repair. In other words, as time goes on the road gets worse and needs higher-level repairs, increasing the dollars needed to fix the street.

In the event that funding comes through for the proposed sustainability, those resources will begin with high levels of preventative maintenance and rehab in order to keep existing streets from getting worse. The next step would be to reconstruct streets that can no longer be saved. Another utilization would then be to relieve property owners of the responsibility of sidewalk repair. Though this is the tip of the iceberg of benefits, creating and maintaining sustainable streets is vital for residential areas, small business, big business, and accessibility.

The Sustainable Streets Task Force lists a number of different benefits investments could produce. As a result, Grand Rapids will boast vital streets, better sidewalks, improved accessibility, 70% good repair on all streets, better neighborhoods, and a thriving economy, just to name a few.

What does the vision of sustainable streets look like in your city?