Have a need for speed? Mix interval training into your running routine 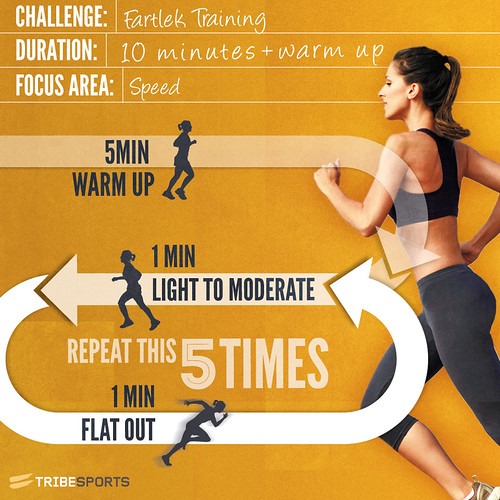 Any runner who goes for long enough eventually develops a need for speed.

Do a community 5K “fun” run here, get into a fund-raising mile-long walk-run there, plan for a 10K, and soon after the race clock casts a shadow over future goals.

When race records are an issue, it’s time to run interval training, another form of long-distance running.

Interval runs are not easy.  Your muscles hurt so bad it seems like it’s going to kill. Your thighs burn.  Your calves ache.  The pain in your  shins shoot up and down your legs.   Your feet go numb from pounding pavement.

But it doesn’t kill, it only feels like it. It actually builds the body. It grows muscle. It builds quickness and greater endurance. It makes a runner a better, faster runner.  Varying paces in a workout from fast to slow repeatedly during a single session also burns more calories than keeping a constant pace.

The term interval in long-distance running most specifically refers to a distance-based method of varying pace during a workout. A typical interval workout in preparation for a 5K run can include three quarter-mile runs in two or three sets, with a hundred or couple hundred yards of jogging between each sprint.

A tempo run is a warm-up jog, followed by at least a 20-minute run at 80 to 90 percent of a runner’s usual 5K pace. A cool-down jog often follows the tempo run.

Fartleks — Swedish for “speed play” — are time-based interval runs. There’s a variety of patterns and plans to use. The basics are for a set amount of time, 2 minutes for example, running is performed as fast as can be done, followed by a slower pace greater than a jog. The slower pace is usually run for a shorter amount of time than the faster pace.

A popular, free running plan on the Web, Couch-To-5K offers non-runners an opportunity to become runners using interval-based training. Couch-To-5K sells mobile apps from $1.99 on iOS to $2.99 on Android. A Web-based, paid-version of the plan is available, too.

LogYourRun has many free training plans for experienced and inexperienced runners. The Web service is free and the company offers a variety of reasonably priced apps.