Flipping my reality switch on to lose weight 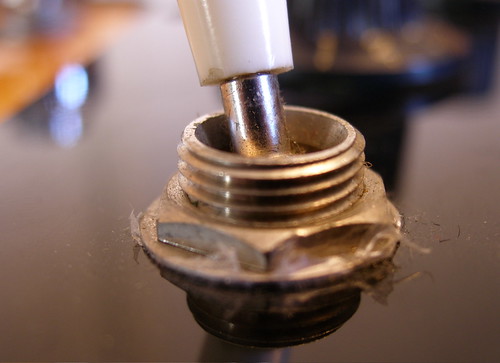 Growing up overweight was not always easy.  Looking back, I can understand why I created so many different coping mechanisms, like convincing myself that all of the negatives health consequences of being obese did not apply to me.  Diabetes, heart attacks, strokes, all of those things happened to other people but they would never happen to me.

I held that belief for years.  I held it until someone I was close with changed my thinking.  The crazy thing is, she did not speak a single word to do the convincing.

For her, speaking was impossible.  But when I looked at her with arms carefully crossed, eyes shut and flowers that read “Mother” upon that oak casket, that vision spoke to me louder than any words ever could.   She was only in her early 40’s.  She too had convinced herself that her obesity was more of a nuisance than a health concern.    It’s almost pathetic now when I think of the concerns that we would discuss, like wishing we could fit into fashionable “skinny-sized” clothing or being able to sit in a theater seat with comfort.  Not once did we talk about a heart attack occurring without warning.

But that heart attack happened.  And I turned on a big switch: reality.

I knew I needed to lose my excess weight, all of it.  The next question was how to begin.

Dieting was simply out of the question.  Diets end, and when they do, any weight that was lost during the diet is almost always gained right back.  I had tried thousands of diets and not one of them ever gave long-lasting results.   I was not going ‘there’ again.

Since dieting was not an option I thought about what options I had.  Whatever option it was, it had to last for the rest of my life.  And honestly, I was tired of hearing about how I should eat low-calorie, tasteless food and engage myself in hours of exercise.  But when a person weighs 300 pounds and loves food, those things don’t sound pleasurable … they are appalling.  I was not doing that for the remainder of my existence.

That reality switch had been turned on.  Reality told me that I needed to get my body up off that couch and moving more often, even if I did not want to.  Reality told me to quit with the attitude and get in the game.  The game was healthier living.  But the problem with this particular game was “how can I make any method of healthier living enjoyable?”   The method had to be fun, like a game, or I wouldn’t play it very long.

I decided to keep it simple.   It was the perfect plan.

But, low and behold, deep down inside my soul there was an obstacle to overcome before I would be able to continue on.   It was an obstacle that had always stopped me before and it was starting to surface once again:  believing  that I could actually do ANY of it.

How did I start believing I could do it?  You guessed it, that’s a story for my next blog post.