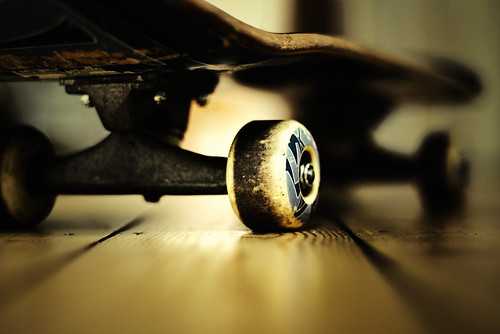 My two kids were, during recent phases of their teenage lives, skateboarders. I was proud of this as I’ve always supported skateboarding. I can remember driving all over the state to visit skate spots and skate parks back in the early 90’s. We would drive as far away as Kalamazoo as that was one of the closest skate parks we could find.

Times have changed and the popularity of skateboarding has grown immensely since my days as a ‘betty’ back in the 90’s. Thankfully, many skate parks have opened in the area since then, but an article that appeared recently in the Detroit News caught my eye for many reasons.

Located at the corner of Davison and Klinger in Detroit, Ride It Sculpture Park is the creation of Gina Reichert and Mitch Cope, the brain trust behind Power House Productions. The park is intended to be intersection of art and action, with curved and colored cement ramps undulating, carrying children of all ages atop bike or board.

Power House Productions partnered with a group of west coast skaters to design and build the park, which spans over four vacant commercial lots. This free (and legal!) skate park embodies vibrancy as opposed to blight and hope instead of disregard.

This is not all though.  A house on an adjacent lot will be transformed into a mini indoor park/lodging space for visiting skaters and artists. Reichert and Cope also plan to extend the park into other areas of the neighborhood in hopes of continuing the community revitalization.

But there’s more. With the closing of local recreation centers, Ride It Sculpture Park provides the immediate community with a place to move, to get physical, to enjoy themselves outside, in the neighborhood streets…

In fact, Power House so firmly believes in getting neighborhood kids out to the park that they’ve distributed about 50 boards to kids in the neighborhood. Before the skate park, many kids, when asked how they spent their time, cited two things: the computer and video games.

The park also draws many kids from the surrounding suburban areas. Kids are coming to the park from places like Novi and West Bloomfield. This provides kids, and in some cases, adults, a space to mix and mingle with folks they may not normally interact with. The park is bridging gaps on a multiplicity of levels.

Ride It Sculpture Park is an exceptional example of the many devoted and hard working Detroiter’s who are committed to a cultural and collective renaissance. If you’re interested in donating to Power House Productions continued efforts to revitalize Detroit and get kids moving, click here.

Have you visited the park? If yes, do you have any stories to share?