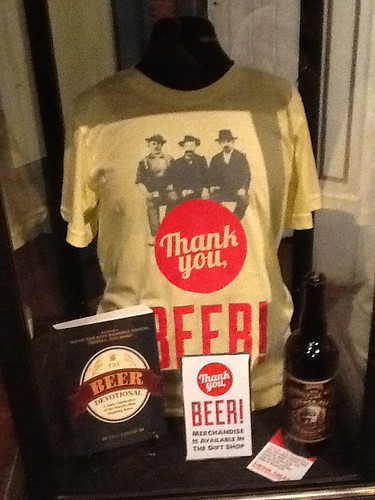 Beer is the oldest alcoholic beverage in the world.  Made from just four ingredients: water, barley, hops, and yeast, beer has integrated itself into every facet of American, and international, culture.  As Plato once said, “he was a wise man who invented beer.”

For the rest of 2012, Grand Rapids is paying tribute to Michigan beer, and beer culture itself, with a Thank You, BEER! exhibit at the Grand Rapids Public Museum.  Open now until December 30th, you can visit the exhibit on Tuesdays from 9am to 8pm, and Wednesdays through Saturdays from 9am to 5pm.  Admission to the exhibit is free after purchasing general museum admission for $8.

Thank You, BEER! celebrates beer and brewing by teaching us about the ingredients and chemistry of brewing, the cultural contributions of beer, the failure of prohibition and the role of beer in pop culture. The exhibit houses collections, brewing instructions, historical breweries of West Michigan and a video tribute to Grand Rapids’ reigning title of “Beer City, USA.”

Two of the displayed collections within the exhibit belong to local collectors, Kevin Foley and Steve DeBoode.  Foley’s collection of beer cans is unbelievably impressive (and my favorite part of the exhibit).  He has been collecting cans for over 25 years and holds every variation of every beer can ever made in Michigan.  The middle rows of the display are strictly Michigan beer cans.  In fact, most of the paraphernalia around the exhibit as a whole is from Foley’s personal collections of Grand Rapids beer gear. 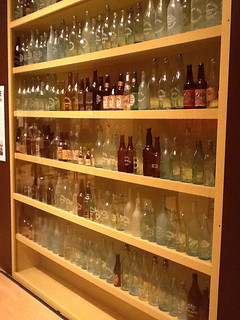 DeBoode’s collection of glass beer bottles boasts an impressive range of historical era bottles.  His collection consists of an encyclopedia of Grand Rapids beer from the civil war era to prohibition and beyond.  Simply speaking, if they brewed, bottled, and sold beer in it for Grand Rapids, DeBoode probably has it.

It’s no secret that prohibition was ultimately a failure in curbing the drinking, what with the presence of bootleggers; however, it did affect the opening and closing of breweries in Michigan.  The exhibit held the historic timelines, through photos, pictures, and artifacts, of numerous brewers and breweries in the Grand Rapids area. For example, we start in 1836 with Englishman John Pannell, who arrived in Grand Rapids and quickly realized that the one thing we were missing at the time was beer.  Nowadays, West Michigan is home to over 29 breweries with more opening on a regular basis.

To supplement your visit to the Thank You, BEER! exhibit, the museum is hosting a number of events throughout the duration of the exhibit.  Beer School features a series of five different Thursday night classes from 7pm to 9pm.  Speakers inform on a number of different beer-related topics and a cash bar with regional beers is provided by the museum.  The Beer School classes to come include: Beer Styles and What They Mean To Us (November 15), Extreme Sides of Beer (November 29), A Holiday Feast—A Story of Holiday Beers (December 6), and The Future of Beer (December 13). 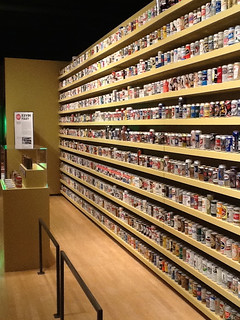 The museum is also putting together a Gourmet Pairing Dinner with museum chef, Hans Dokl, who will present a five-course dinner paired with beers made by the five winners of the Brewer’s Challenge (an event associated with the exhibit that occurred at the opening).  The pairing dinner is held on Saturday November 17th from 630pm to 930pm.  The last series of supplemental events for the exhibit is the Hoppy Hour Tastings.  Every Tuesday night from 5pm to 8pm and some Saturday afternoons from 11am to 5pm throughout the duration of the exhibit provides the opportunity for adults to purchase and enjoy selected regional craft beers, with free root beer samples for the kids.  Hoppy Hour Tastings occur October 27 and 30, November 6, 10, 13, 17, 20, 24, and 27, and December 1, 4, 8, 11, 15, 18, 22, and 29.

Tickets for the exhibit and for specific exhibit events can be purchased here.  Michigan is also a great beer state, be sure to check out our 2012 listing of Michigan based breweries.  And be sure to enjoy your brew in a responsible manner!

What beers and breweries have become popular in your area?
Photo credit: AHealthierMI