How are you pushing the domino of health in your community? 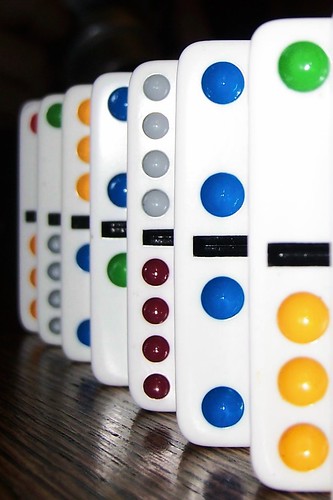 The domino effect is what happens when one person influences another to make a change, and that change is contagious.  I’ve witnessed it myself and realize that even if the initial change is small, it has the power behind it which bears a close resemblance to the gentle ‘push of a finger’ on a single domino… the end result can be colossal!

So I wonder, are you ready to give a gentle push in order to create a domino effect within your community?  You have the power and the ability within, now the next question is when will you push?

Your answer could be, “I’m currently pushing,” if you live in the Saginaw area.   Last week I was included in the wrap-up of the Blues’ strategic partnership with MCVI’s (Michigan Cardio Vascular Institute) “Run For Your Heart”  WalkingWorks training program and I observed the domino effect first hand. More than five dozen participants were included in the program, and quite honestly I personally feel they each – in their own distinct way – have become healthy living ambassadors who are gently applying pressure to a domino in their life.

These participants endured over 10 weeks of above normal summer heat in addition to desire and motivation to complete the wellness program which meant they were physically able to finish a 5K race… love it!  They had remarkable trainers who allowed them to see potential in themselves that they couldn’t see on their own.  Those trainers created a domino effect and I saw first hand these health-focused participants want to initiate the power behind the push of the domino as well.  They are ready to make those dominos drop … with full force!

As the program came to a close, we came together for a conversation and discussed some things like, “how have you changed since the program began?  Have you noticed any changes to your health such as weight loss, lower cholesterol numbers, sleeping better, higher level of energy?  What is your message for others who want to become healthier?”

And that was the moment when the level of support became apparent to me.  Not only the incredible  support the participants had been receiving for the previous time period, but also the support that they were willing to give to others who want to become healthier as well.

After successfully holding back my tears that were trying their best to stream down my face, I took a moment to feel the support in that room, appreciating the fact that I was there to witness it.  The goal of these individuals was quite obvious:  to extend the support that they had each received and pass it along. They were committed  to creating their own domino effect for the motivation and desire to live a healthier lifestyle to other people in the community.

These participants had several messages to share, such as how daily exercise can fit into your schedule, how great it feels when you accomplish a goal- such as completing a 5K (something many thought they could never do) and that trying to work towards a healthier lifestyle along with another person, such as a spouse, co-worker, friend, neighbor or trainer, makes it more enjoyable and keeps a person credible.

They discussed that when others tell them that they can do it, they believe that they can!   These words have a powerful way that tends to push others gently towards their full potential of becoming a healthier individual; allowing those words to be shared with another, and another… and another until they create the domino effect.

With it, I feel that Michigan will become healthier – one gentle push at a time.

What are you doing to push the domino of health in your community?