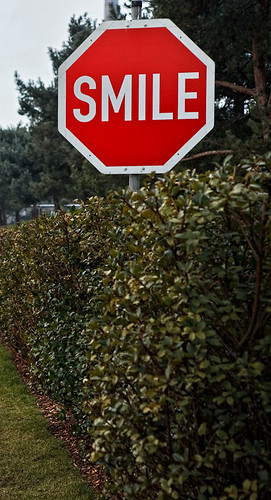 A few months ago I was walking down the hallway at work and passed two co-workers. We smiled and exchanged pleasantries. As they passed me, I heard one remark to the other, “she always seems to have a smile on her face.” Hearing that made me smile even wider.

It’s true, I try to smile as much as possible. It’s a habit I’ve been forming since my days in college when I was lucky enough to have Dr. Paul Pearsall as a professor. He would often talk about the benefits of smiling and how if we wanted to quickly change the way we felt, all we needed to do was smile. Pearsall contends that smiling provides an “oxygen shower” that allows for increased blood flow to the brain. In fact, in his book Super Joy Pearsall suggests this simple test:

Pearsall explains that during the process of this “oxygen shower… you may feel just a little more joyful even though you didn’t do anything more than ‘act’ joyful.” See what you’ve done? You’ve just made yourself a little happier. Now, can you imagine what you would feel like if you were addicted to smiling?

A recent study entitled “Grin and Bear It: The Influence of Manipulated Positive Facial Expression on the Stress Response” reinforces the claims made by Professor Pearsall. Nearly 170 participants of study had their smiles manipulated by chopsticks into either:

All participants were then asked to participate in stressful, multitasking activities, but some were instructed to smile in addition to the smiles forced by the chopsticks. All the while, heart rates and stress levels were monitored.

Other reasons to smile include:

Anyone up for a challenge? Try smiling as much as possible for a week or even a day. Smile even when doing mundane things like loading the dishwasher, folding laundry or during your commute to work. Let me know what you think, what the results are of your informal study – they’re sure to put a smile on my face.