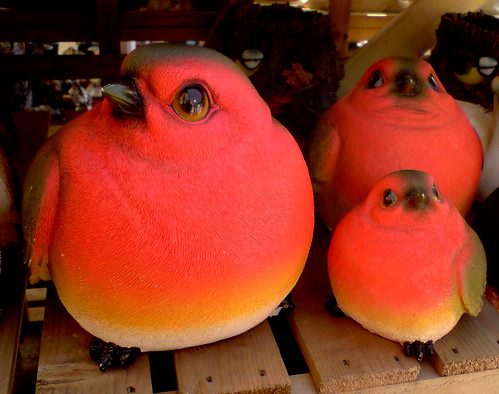 People who are a lot alike have a tendency to gather with each other and become friends. This type of behavior has been going on for centuries. Whether these people are similar in positive or negative ways, they sometimes don’t mix with people of another nature. The same sorts of people tend to stick together… in other words, “Birds of a feather flock together.” So does that mean that people who are overweight tend to gather, or flock with, other individuals who are overweight as well?

From what I’ve seen and experienced through my years of obesity and beyond, I’ll be brave and answer with a definite yes. I didn’t experience this so much in school because I was one of only a few students who had a major weight issue back in the ’80s. But I will say that during those few times when I did happen to have a class with any students who were overweight, we immediately flocked together and sat at desks near each other. I think we each felt a comfort knowing that we were each with the same sort of person. The skinny kids sat in a different area of the classroom.

The same scenario occurred during the years I was employed at a Fortune 500 company. I worked with hundreds of people, but found that the employees who I enjoyed spending my 10-minute breaks with were overweight, just like me. Each of us found that comfort in knowing that we were sitting at a table full of other people who were similar; we each knew the overweight life, both the good and the bad.

The good meaning that there were days when we could care less about what we were eating during our breaks. Since we each always seemed to be dieting, it felt good to know that we could enjoy all the fattening, high-calorie foods and not feel guilt because we would decide to eat those foods together. Now obviously, today I don’t consider that “good” — but it was amazing back then to just not care. Chips, candy, cake, doughnuts — we enjoyed everything, together, and laughed about the fact that we ate too much.

What do you suppose happened the next day? The bad meaning that we would complain together. The conversation focused on all those “skinny” coworkers who didn’t need to lose weight like we did. Or even worse, we’d assume that the only reason they — the skinny ones — were promoted within the company was due to their amazing figures and the clothing they wore to display them. Discussing how life isn’t fair and wondering why we weren’t blessed with thin genes like they were happened more often than not. Did we ever admit that we were not practicing healthy lifestyle habits? Never. It was more enjoyable to belong to this group of overweight friends and complain instead!

I guess you could say that my group of overweight friends helped influence my own size as I learned not to care about my obesity during those years of employment there. I liked having others to share my weight problems with; we bonded and “flocked” together. I’m not alone, as I have recently learned that a Loyola University study of high school students has shown evidence that a person’s circle of friends may influence his or her weight. Students were more likely to gain weight if they had friends who were heavier than they were. The study doesn’t say anything about these friends growing heavier together, but I can assume that it happened.

It happened to me, which is why I’m that much more appreciative that I finally realized the risks of this type of behavior. It could have eventually led to severe health risks, possibly even an early death, but instead I changed my ways and lost 162 pounds.

Now I have a goal — to help others change, too. Allow me to help those of you who flock together to readjust your thinking and your ways. Hey, I’ve been there and I do understand, believe me. I also understand that healthier habits are pretty awesome… and healthier friends are even better!

It’s up to you. Allow me to come inspire your entire flock. You can request me as a guest speaker here.