#WellnessWeds: this colorful trick helps you eat less at each meal 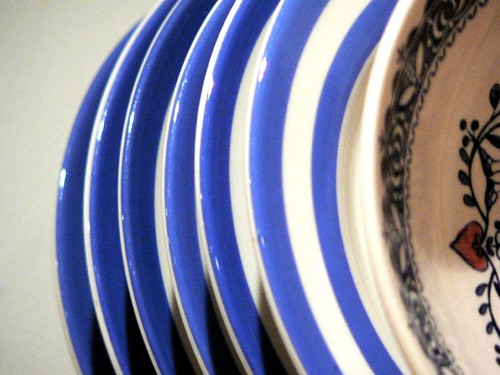 Anyone who has ever tried to shed a few pounds has surely attempted a few tricks along the way.  The weight-loss journey can be difficult, even a bit annoying at times.  To discover a creative method that provides positive results is always a good thing.

So what is the new trick for today?   It’s a trick of true visual illusion and can cause you to eat a little less at each meal, which can eventually add up to a big time reduction in calories!    All you have to do is focus on the color plates that you eat from.  Okay, sounds a little silly, but it actually has been proven to work.  The theory goes like this:

Less color contrast between the plate and the food – you will eat MORE.

More color contracts between the plate and the food – you will eat LESS.

This little trick was actually discovered after researchers recruited 60 participants who were invited to a pasta buffet.  A red tomato sauce was offered along with a white Alfredo sauce.  The 60 participants were given one plate to use at the buffet.  Some of the plates were red, some of them were white.

After each of the participants filled up their plates with the pasta offered at the buffet, the portion sizes were measured.  The researchers found that the individuals who selected the white Alfredo on white plates consumed between 17-22 percent (and average of 2 ounces more) MORE than the individuals who consumed the white Alfredo on a red plate, which is obviously a contrasting color!  Interesting.

With the noticeable color contrast you can see what you’re eating more easily and you eat less. When the plate is the same color as the food, there is less contrast so you tend to eat more.   So basically, the people with contrasting color between their  food and their plates took an average of 2 ounces more than the people with similar color between their food and their plates.  This might not seem like much but in actuality those 2 ounces can surely add up over time.

For this pasta meal alone, it was an additional 200 calories – which adds up to about two pounds a month.  Multiply that by twelve … it’s 24 pounds a year!  And that is the total pounds per year after adding up 200 additional calories for just one meal per day.  Think of the numbers we’d come up with if we calculated the calories for three meals per day, every day, for an entire year!

Obviously you can’t have different dishes for every meal, but blue plates are shown to help you eat the smallest amount because they have been shown to be the least appealing blend with food colors.  Two colors you probably want to stay away from are red and gold since these are colors show up in a lot of foods.

Remember,  the more contrast between your plate and your food, the less you’re likely to eat!  That’s pretty effortless if you think about it!

Do you have any weight loss tricks that have worked for you?