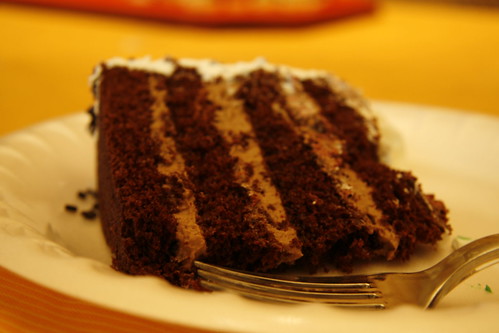 Most diets fail because of food. They prevent us from enjoying certain foods, they make us eat the bland ones or force us to keep a mental tally of our food points.  When told NOT to do something, our inner child only wants to do it more.  So when a diet tells us to avoid carbohydrates, fats or desserts we immediately put those things on our mental list of things to binge on once the diet is over.

My personal philosophy on diets is that are and will always be about the food.  A recent study was recently published in Israel that supports my philosophy and has caused me to rethink my own eating habits.

In this study, 193 obese participants were split into two groups.  The first group was instructed to eat a small, 300 calorie breakfast while the second group was told to eat a large, 600 calorie breakfast that included a dessert.  DESSERT!  Yes, suggested things included chocolate, cookies, cake, ice cream, or donuts.  Both groups of participants still ate the same number of calories per day.  The only difference was the number of calories consumed at breakfast.

After 16 weeks, both groups had lost roughly the same amount of weight.  Afterwards, participants were encouraged to continue the diet but were allowed to eat more or less if they were hungry.  The differences were amazing.  The high calorie dessert with breakfast group had an average weight loss of 15 pounds while the low calorie breakfast had an average weight gain of 24 pounds.  That is a difference of nearly 40 pounds.  In addition, the high calorie dessert breakfast group had lower levels of ghrelin (the hormone involved in hunger cravings).

Lead researcher Daniel Jakubowicz explains that having an enriched breakfast to include a dessert item helps to reduce cravings and hunger leading to a more compliant dieting program.  Higher rates of compliance mean more weight lost.  The group that had a smaller 300 calorie breakfast reported higher hunger cravings throughout the day, leading to a craving binge and weight re-gain.

This brings me back to my philosophical utterance: “the diet has been and always will be about the food.”  The study suggests that enjoying your favorite guilty pleasure once in the morning is a great way to minimize its effects by “burning” it off throughout the day rather than sleeping on it following post-dinner consumption.  While this may result in fewer cravings and more weight lost, it is not acceptable to simply toss your veggies and stockpile the refrigerator with cakes.

Dietitians hate this type of research because it only takes one to morph minds into thinking that only eating cake will help you lose weight.  It is important to remember that while it may help to reduce weight gain, diets high in sugars, carbohydrates and fats greatly increase the risk for other conditions such as heart disease or diabetes.

Remember that you could also eat a healthy 600 calorie breakfast which excludes sweets in favor of foods like fruits to satisfy your sweet tooth. And it is always a good idea to consult with your doctor before you try any diet, even the tasty ones.