In the game of life, is failure an option? 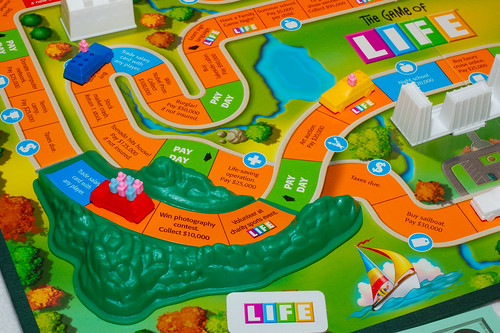 Everyone has played a video game or two during their lifetime. Of course, the video games that I first played as a teenager are totally obsolete now. Games like Donkey Kong, Pacman, Frogger and Duck Hunt were extremely popular.   Those were all great games, but as far as I was concerned none of those games could compare to my favorite of all time: Centipede!  There’s just something about shooting sections of a continuous moving centipede and turning them into mushrooms that excited the game-playing soul in me. It may also have something to do with playing this thrilling game on the  stand up coin-operated arcade machine with the awesome artwork on the side and the amazing trackball controller … how I loved that thing!

It’s funny to look back at the days when we’d all go to the local bowling alley on a Friday night with our pockets full of quarters and immediately enter the arcade to play these video games on six-foot tall machines. Of course the main goal was to beat the high score of a previous player that was prominently displayed on the huge screen in front of you.

Each one of us had learned to master the games of our choice, learning new tricks that would allow the points to rack up faster than we had anticipated. I still don’t know how I managed to maneuver that trackball controller as well as I did back then. When I think about it, I remember that my goal to aim for that high score and nothing was going to stop me. I was going to control that trackball to the best of my ability and win. Failure was NOT an option.

Failure was NOT an option. Isn’t that exactly how a large percentage of us feel when we are attempting to win at anything? Whether it’s a video game, a race or a contest, we strive to be the best and not allow the option of failure to enter the picture. Of course, even if you master one of the above mentioned video games or win any race or contest, it doesn’t really change your life. It feels great but it was really all just for fun and you move on.

But what if you were to attempt to win at another kind of game, the game of life? Would you still learn to master the game and find new tricks and maneuvers that would allow you to succeed at an alarming rate? Do you suppose that you would “play it” at the best of your ability and continuously aim to win? I wonder if failure would be an option for you.

Can you answer those questions without hesitation? Most likely not. Isn’t it funny that as soon as anyone mentions a game pertaining to real life, then all of a sudden the game fails to create much excitement or interest. Not that I like it but it’s a feeling that is shared by millions in America, as my youngest daughter, Rachael, brought this up to me yesterday.

She rendered me speechless when she said, “Mom, isn’t it funny how if we played a video game on losing weight, we would all master the game and aim for a high score.  But in real life, it is more difficult when our life actually depends on it.  We can ALL do it, we just have to unravel the motivation and drive within us to do so.”   By the way, this was a proud mom moment for me!

Not only was her comment correct, but she really made me think about the fact that her own mother played that game.  It took me over two decades, but I finally mastered the game and aimed for the high-score. Failure was not an option for me once I realized my life actually depended on it.

Please, think about her words and then take a moment to realize that we BOTH believe you can do it.

You have the ability to unravel the motivation and drive.

This game is for real.