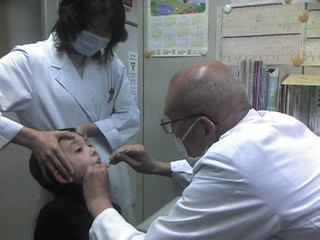 Concern over flesh-eating bacterium is not something new — remember MRSA? But in 2012, its hype seems to have receded. Prior to a couple weeks ago, I really didn’t know or remember much about it at all.

Then I heard Aimee Copeland’s story.

After suffering a gash from a zip-line accident while on vacation in Georgia, Aimee became infected with a rare flesh-eating bacteria and is now fighting for her life. After reading about the incident, I was intrigued: what made this particular bacteria potentially fatal? Could it happen here in Michigan? I turned to Dr. Cary Engleberg, an internal medicine professor in the Division of Infectious Diseases and professor of Microbiology & Immunology at the University of Michigan Medical School, for some answers. (Note: Certain parts of Dr. Engleberg’s emailed reponses have been paraphrased for clarity.)

A Healthier Michigan: What causes the flesh-eating disease? Who can contract it?

Engleberg: The bacteria that cause ordinary strep throat and less aggressive skin infections are the same that cause “flesh-eating disease” (I put this in quotations because the bacteria do not actually eat tissue: they destroy it). Individuals pass it through close contact, respiration and contamination of inanimate objects. However, most cases are not caused by penetration of contaminated objects into deep tissue; in fact, about a third of cases occur after blunt trauma, like a bruise. Some cases even occur spontaneously with no apparent injury. So, the prevailing view is that there is something about the host that permits this type of infection to occur (such as genetic predisposition, as some evidence suggests).

Is the likelihood of infection greater in some regions than others?

Some regions or cities have reported higher rates than others during the 1980s when there was a worldwide spread of some more aggressive strep strains. In general, the frequency of invasive strep disease is greater in the winter and spring in temperate climates.

Do we need to worry about becoming infected every time we fall and get a cut?

How many times have you fallen and gotten a cut? Did you contract the disease?

Is there anything that can be done to prevent infection?

The key is to recognize when a skin infection is more than a simple skin infection and constitutes an emergency. The sooner that treatment is initiated, the less damage there will be. Symptoms of a larger problems may include severe pain, loss of sensation of touch, and white or purple coloration of skin at the initial site of infection. When the strep infection is severe and deep, high fever and generalized rash may also be present, signifying the accompaniment of toxic shock syndrome. In such a situation, it is up to the physician to recognize this is not a typical case of strep and to involve surgeons early. Antibiotics alone will probably not help.

Why did Aimee’s case escalate the way it did?

Although I don’t know for sure, I think it was probably determined largely by her genetics or current condition.

The chances of contracting flesh-eating diseases are very slim, but it is still important to make sure you don’t allow infections go untreated. By consistently monitoring your health, you can minimize the risk of becoming infected with such a dangerous disease. ♦