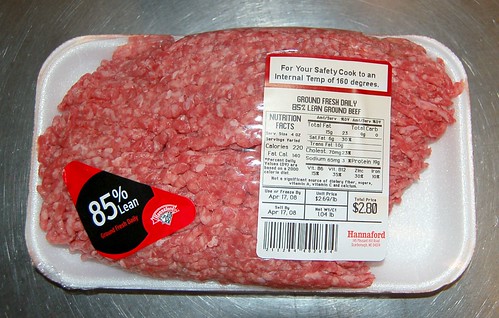 The news that hamburger and other ground beef has for years contained so-called pink slime has caused plenty of public outrage, disgust — and misplaced fear. The good news is twofold: the product is recognized as safe, yet it should become easier for school districts, parents and consumers to find alternatives if they want to avoid it.

The bad news? Pink slime should probably be the least of your concerns about the U.S. food system.

Pink slime, the name given for what the industry calls “lean, finely textured beef,” is made up of processed trimmings treated with a puff of ammonium hydroxide, an antibacterial widely used in food processing. It is used to reduce the overall fat content of beef and reduce costs.

The meat additive has been used since the early 1990s but more recently gained notoriety as “pink slime” after an internal email from a U.S. Department of Agriculture product safety scientist went public.

Responding to pressure from parents and schools, the USDA recently announced that it will begin identifying products offered through the National School Lunch Program that contain lean finely textured beef and, where possible, offer alternatives. For example, schools will be able to choose between ordering bulk ground beef without LFTB or formed patties that include the filler.

The federal agency, which supplies only between 15 and 20 percent of food served in school lunches, also reiterates the safety of LFTB and says that foods approved for the school lunch program must meet and in many cases exceed the safety standards set for commercial foods.

The USDA also labels ammonium hydroxide, which has long been used in products like baked goods, cheeses and chocolates, as a “generally recognized as safe” food additive. The chemical is used to prevent the spread of E. coli bacteria in meat.

On the Other Hand

I have no real problem with the idea of using trimmings, leftovers, offal and other less-desired parts of the animal in foods (what do you think they put in sausage, after all?). If we’re going to kill an animal for food, we should use as much of the animal as possible and limit waste.

But it’s another thing that meat processors have gotten a free pass on labeling beef supplemented with LFTB or ammonia for so long. People should at least know what’s in the ground beef they’re purchasing, as USA Today points out:

It’s something of a hollow victory given that pink slime is probably safer than the rest of raw ground beef. But its use points to a broader problem in the nation’s food supply.

Thanks to industry lobbyists, Americans are often kept in the dark about what’s in their food and how it’s made. The USDA says labeling for LFTB isn’t necessary because it is beef. Telling consumers about the puff of ammonium hydroxide isn’t necessary, either, because that’s a “process,” not an ingredient. All this sounds like bureaucratic mumbo jumbo.

It should also be noted that the USDA in recent years has fallen flat in its duties to safeguard the public, with salmonella, Listeria and E. coli outbreaks becoming legion. A better question raised by the controversy over pink slime might be why E. coli remains such a threat to consumers despite the supposed advances of the modern food production system.

If anything, the pink slime episode signals a change in how consumers relate to their food, writes the New York Times’ Mark Bittman:

And this is how it’s going to be from now on; public pressure will increasingly determine policy, and not only in food: “Before the Internet,” says Bill Marler, a food safety lawyer, “companies and governments simply made decisions, assuming the public didn’t need to know or even care what was in their food. That is no longer the case.”

The uproar has already had wide repercussions in the industry, with grocery chains and fast-food restaurants eager to distance themselves from pink slime. But pink slime isn’t necessarily the cut-and-dry topic that either side in the debate would have you believe. Here are some good background reads:

Have you changed your meat buying or eating habits in the wake of pink slime? Why or why not?