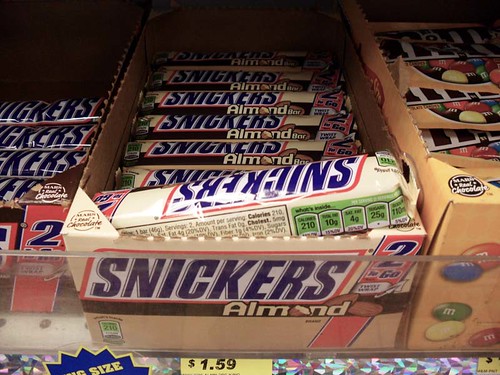 Fun-size and king-size: One of these will soon hit the novelty dustbin after Mars Inc., the maker of Snickers, Twix, Mars bars and M&M’s, announced it would stop selling chocolate products containing more than 250 calories by the end of 2013.

That means the end of the king-size bar, since there are 540 calories in a king-size Snickers bar. And a slightly lower-calorie chocolate, since a regular Snickers currently contains 280 calories.

The announcement adds to a spate of recent changes in the food industry in response to calls to improve the nutritional value of what we eat from consumers and government agencies. School cafeterias, restaurants, Walmart, Pepsi Co. and others have banned trans fats, cut sugar and salt levels or boosted the selection of organic foods in response to public pressure, consumer demand or government mandate.

Mars says the move reflected its “broad -based commitment to health and nutrition” and was part of its ongoing efforts to improve the nutritional value of its products and promote responsible snacking. It also said it would stop buying advertisements in media if more than a quarter of the audience figures to be under age 12.

Given Mars’ size and market share — Dove, Milky Way and 3 Musketeers are also among its chocolate brands — it’s not hard to imagine other candy bar makers following suit. In other words, the writing is on the wall for king size chocolate bars.

There’s little doubt that part of America’s obesity crisis is rooted in the supersized quantity of foods that we eat.

On the other hand, it’s easy to see moves like this as more of the same scattered, piecemeal approach to nutrition. (Anyone remember the oat bran craze of the ‘80s?)

What do you think about shrinking candy bars? Good move? Makes no difference? Will you miss king size chocolate?