Which People Most Inspire You? Here Are My 3

If I could be like anyone in the world, who would it be? It’s funny how our answers change as we grow older. When I was a young girl, I remember watching the popular television show “One Day at a Time” and overhearing my parents talk about how smart and adorable Valerie Bertinelli was. That was the moment when I knew that I wanted to be just like her.

Granted, I was only 10 years old, but she was someone I looked up to. That little wish of mine has not totally gone away, since she still looks just as adorable now as she did back in the ‘70s, but my wish now has more to do with the fact that she has inspired millions to lose weight along with writing two successful books on the subject. Why would I not wish for that? She is an awesome individual and I hope to have a conversation with her someday.

Valerie wasn’t the only person who I looked up to when I was young. There was someone else, but it wasn’t due to the fact that my parents thought this person was smart and adorable. Remember I was overweight during my teenage years, struggling daily to lose a pound or two, constantly dieting and wishing to be thin. Who else other than the diet guru himself, Richard Simmons, would I look up to? He once weighed 268 pounds and was able to lose 123 pounds successfully — and I wanted Richard to help me too. 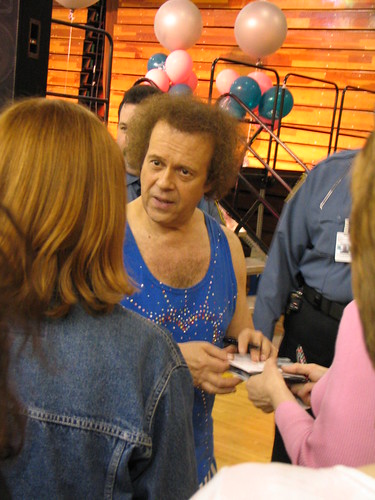 I remember attending a presentation he gave at a local hospital. I was in the front row and actually touched his shoe (a big deal for a 14 year old!). No, I didn’t have posters of the guy hanging in my room or anything, but I knew that he understood what it was like to be the fat kid. That similarity helped me feel a connection with him.

I still think Richard is pretty awesome. He has been helping people lose weight for 37 years and you’ve got to admit that you can’t help but smile when he appears on a television show. No, he’s definitely not your “average Joe,” but that’s what I like about him. Richard Simmons honestly cares about those struggling with their weight, he is not a fake. He’s genuine and sincere, which is why I still look up to him. His past and present accomplishments inspired me to create numerous goals for myself. Richard is another person I hope to have a conversation with someday in the future. There’s one more person who I look up to, but it’s not someone I know from my youth. This person wasn’t brought to my attention until the year 2005, three years after I completed my 162-pound weight loss. I surely want to have a conversation with this inspiring individual and with any luck, it will happen. Actually my good friend, Jon Stanton, did have a nice chat with this person as he shared his own 230-pound weight-loss success story with her in New York City. Oh, he rubbed it in a little bit with me and made sure to take a photo with the famed personal trainer Jillian Michaels.

OK, so I was jealous ever so slightly, but I was also very happy for him — the smile on his face in the photo is priceless!

Jillian, like Richard Simmons, appears to be a genuine and sincere person; she actually calls herself “shy and prude.” Jillian claims that she enjoys helping people build happier and healthier lives (hey, that sounds familiar!). I didn’t know this until a couple years ago, but Jillian was actually bullied in junior high school when she was overweight. Her classmates made cow sounds at her when she walked down the hallway (that sounds familiar too). Soon after, she got into martial arts. Before long, Jillian believed in herself and — here’s what I really love — respected herself! One of my favorite comments from Jillian is, “When you’re physically fit, you’re more confident and empowered.” You said it, Jillian!

So, if I could be like anyone in the world, the above three individuals surely qualify, but honestly I like who I am now and I don’t wish to be like anyone else. Which one do I want to meet? All three of them!

Who do you most admire in your life? Which person mentioned above inspires you the most? Why?