‘Poor Rudolph:’ Why Some of Us Can Identify With Santa’s Favorite Reindeer 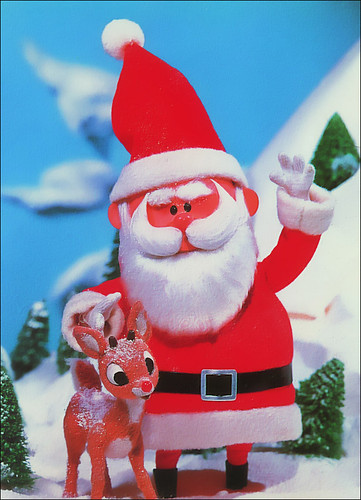 It’s the most wonderful time of the year! One of my favorite things about the month of December, in addition to my shopping adventures and festive gatherings with my friends, is the movies that bring back so many lovely memories from my childhood.

I remember anxiously awaiting, along with my younger sister, for those special nights to arrive when one of the featured presentations was scheduled to play on one of the three television channels (cable wasn’t even a word we used back then). My sister and I would get comfortable on the shag carpeting in our red footie pajamas, directly in front of the TV set — we had to make sure we didn’t miss a thing since these movies were played only once a year — along with a big bowl of popcorn between us. We’d sit there in anticipation as we excitedly waited for that familiar movie introduction to begin and I don’t think we said a word until the movie was over. Those were the days…

We all can remember how great it was during those days, and oftentimes we go back to that same, innocent time in our lives that we don’t ever want to forget. Yes, these classic movies truly do take us there and have a tendency to allow us to relive that magical Christmas feeling that comes from years past. These are positive memories for most of us and the reason why I still have to stop and watch these Christmas classics when I channel surf.

But there was a time in my life when not all of these movies brought a smile to my face; they actually created tears instead.

Too Close to Home

Take “Rudolf the Red-Nosed Reindeer” for instance. I would see how Rudolph felt when he was being teased and bullied by the other reindeer, and I could totally relate to him. It’s embarrassing to admit it now, but even the classic song lyrics would bring me to tears, especially this well-known line: “All of the other reindeer used to laugh and call him names / They never let poor Rudolph / join in any reindeer games.”

Once I was out of elementary school and became an adolescent, I was teased, too — about my weight. All of the other kids used to laugh and call me names. No, they never let “poor Jodi” join in any games… or any other activities, for that matter.

Then there was the song in the movie that I felt was written about me, the one about the misfits. I loved that song when I was a young child, but once I realized that they were singing about me, I didn’t like it any longer. A misfit is defined as a person who is considered to be disturbingly different from others — me all the way.

Luckily I never considered running away from home like Rudolph did in the movie, but I will say that my life, like Rudolph’s, was very difficult to bear. It’s not easy being the misfit and having others make fun of you because of your appearance. So I kept telling myself that nobody is a misfit in reality, not even me! I began my journey of becoming confident and strong. I stayed strong. I didn’t give up on myself. I knew that I would not only eliminate my self-given title of misfit, but I’d help others do the same.

It’s my Christmas wish to help you overcome any negative title you’ve given yourself and allow you to learn how to become confident and strong — and stay strong! I want to motivate you to become a healthier and happier person, never EVER allowing you to give up!

Hey, I may not “…go down in history” like Rudolph, but I sure can help you have a healthier history!

Join me again on Friday as I visit another classic holiday movie!