‘The Art of Roughhousing:’ Anthony DeBenedet on Why Parents Should Play Physical With Their Kids 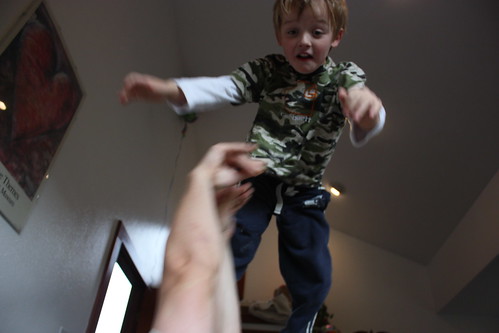 During his presentation at TEDx Detroit last month, author Anthony DeBenedet delighted many of the parents in attendance with his discussion of the importance of playing rough with your kids. For some of us, his discussion offered enthusiastic justification for the human steamrollers or pillow fights we engage our children in once we get home.

DeBenedet, 34, is the co-author of “The Art of Roughhousing: Good Old-Fashioned Horseplay and Why Every Kid Needs It,” which came out in May, and a board-certified internal medicine physician currently sub-specializing in gastroenterology at the University of Michigan.

In an era of record-high screen time for kids and a collective “obsession with safety,” DeBenedet argues that rough-and-tumble play brings emotional, developmental and social benefits and helps teach kids about love, affection and making connections.

“Saying no just leads kids to roughhouse recklessly when we’re not around, which is much more dangerous, DeBenedet and fellow co-author Lawrence Cohen told The New York Times. “Knowledgeable roughhousers know how to lift and twirl, land and roll, and catch and suspend. The ‘rough’ in roughhousing refers not to danger, but to the unleashing of the creative life force, which is joyful and exuberant.”

DeBenedet recently spoke with A Healthier Michigan about roughhousing, the decline of playing outside and parents who can’t put down their smartphones.

A Healthier Michigan: You and your family live in Ann Arbor?

DeBenedet: Yep, we live in Ann Arbor with my wife and then we have three girls – 5, 3 and almost 1.

It was really that experience with them that kind of turned me on to the concept of rough-and-tumble play and play in general. I had grown up in a divided household, I would say, when it came to rough-and-tumble play. My dad was a professional hockey player and he grew up with four brothers. That stuff came natural to him, the idea of interacting that way. My mom was an ER nurse, so she kind of ran away in a panic when my dad and I would (roughhouse).

Why did she run away?

She was worried that someone was going to get hurt or that we were moving into this realm of aggression or something like that. I think it’s a common fear for a lot of parents.

And did anyone get hurt?

No. I get a lot of questions about safety because people often think, well this is unsafe. And then they immediately translate it into hyperactivity and chaos, which it isn’t. But when we actually looked at ER data, the majority of childhood injuries are not because mom and dad are roughhousing with the kids. It’s actually more from kind of recklessness.

The thought is if kids aren’t getting that outlet from mom and dad…when they go out into the real world they’ll actually translate it into recklessness, because the have built-up energy inside of them that hasn’t been able to be released.

So you came at roughhousing both through your own experience as the son of a hockey player and also as the father of three girls. What got you thinking about this as a subject for a book?

Probably two things. One was the story that I shared at TED, this idea that every time I came home, I’d get that kick, my oldest daughter Ava would run into me, that’s how she greeted me when I would come home. But what would happen is she started going through this stage where she wouldn’t let me really be a part of her life. She was 2½. And that led to this idea of trying to use play more to integrate into her life.

Really what she was saying to me was, ‘Daddy, I’m not quite ready to forgive you yet for being gone all day.’ Once I stated using play to help her in a way almost come to a good point with me, that’s when I really got turned on to the subject.

Then one day I was wrestling with her, doing all these flips and twirls, and she was loving it, and I was like, there’s gotta be benefits to all this. Then I started digging in to all the science that’s ever been written about rough-and-tumble play. l was going back to the ‘60s and ‘70s looking at animal behavior research. That was kind of the start of it.

Then I started reading modern-day child development research, you see that this is really an amazing thing for kids. As I said at TED, it’s probably the best, if you had to choose one thing to do with your kids. The problem is, we just don’t. Society looks at it and says no way… because it’s unsafe, I don’t know how to do it, I don’t know if I can do it.

The bottom line is everything is the opposite direction. It’s totally safe. From a connection standpoint with kids, there’s actually nothing that can build that connection more. What was your approach in writing the book?

We used essentially a compilation of primary research done by other folks. The second thing we used were actual case studies, not only with Larry that he’s done in his professional life (as a child psychologist), but also anecdotal pieces within my circle of friends, parenting groups that I’ve been involved with, actual roughhousing being a way to actually improve cooperation, ADHD and all this kind of stuff. The final source was simply creative inspiration from a variety of what I would call physical disciplines.

So sum it up if you could; why is it important for kids to play rough?

The connection piece is really the big piece because we know that — talking about adult happiness — we know that when kids are asked, was there anything about your parents that they did, they say, ‘Well they loved us, I felt a sense of love and I also felt a sense of connection. My mom or dad, or my guardian or whoever were actually there with me.’

That’s a big jump to make — it may sound kind of trite, but it’s a big jump and there’s little things that you can do and I think rowdy play is really the best way to do it is to make kids feel like you’re there with them.

To give you an example, you go to a park these days — what I find fascinating is you go to a park and you find out how many parents actually play with their kids, or does the park actually become the babysitter, or does the park become the place where you’re going to check your email or pull out your phone? All of those cues are actually telling the child that mom and dad aren’t really there with me.

But when you’re actually in there playing with them and when they do it in the rowdy interactive physically way, there really is nothing like it that tells a kid that you’re really there with them.

You also think that parents by and large have gotten away from this.

Absolutely. The big forces are the education piece. In general, we still are of this mentality that we must study, study, study, and that comes at the expense of this kind of interaction and fun. And what we say about safety, and it’s important to note, is we have become obsessed with safety as a society.

Play for you and me, it looks a lot different than when I grew up. The great experiment I did is to go out and drive at dusk in the summertime or non-school night. Go out and drive to like five neighborhoods and count the number of kids you see playing. You’ll probably see one group, where 20 years ago, 30 years ago, everybody played outside. I used to play outside all the time. I used to feed bats with tennis balls and ham. That’s because of this piece that we’ve gotta get in and study. Everybody’s gonna get kidnapped outside if we leave them out there.

It’s unrealistic, and I think what’s happening is we’ve swung almost too far. If you look historically it’s almost like colonialism. Colonialism was, work your butt off and study your butt off and don’t dance. The other big thing is this green piece. Technology is great, and there are a lot of great advances, but at the same time, it does impact on this idea of connection with other humans and especially play.

What we’re saying about safety is that safety comes from knowledge. That’s what we try to give folks in the book is how to do a lift without giving kids a dislocated elbow, how to land safely from a roof without breaking your ankle. How to twirl a kid without dislocating a knee. Some of that stuff comes from my medical background, but a lot of it is just common sense from just being a parent.