Holiday Season Temptations, Pitfalls Await: Here’s How To Conquer Them 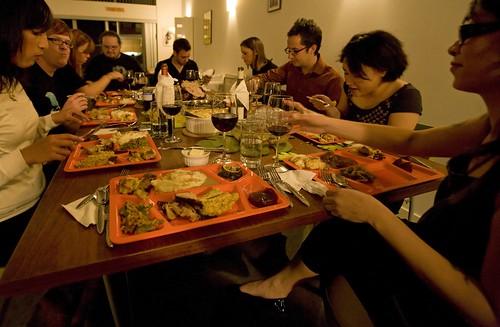 Brrrrr… I sure do miss the warm temperatures from a few days ago, but I’m also grateful that we had them. It’s time to face facts: It’s the middle of October and I can’t expect weather to be in the mid 70’s again in 2011. I suppose it’s time to bring down the Halloween decorations from storage, but I’m not looking forward to it because this is the time of year when reality sets in. I already know that once I remove the boxes of autumn decor from their spot in the attic, I’ll see the numerous plastic totes full of Christmas items that will need to be removed and brought downstairs soon after. That’s when it really hits me: the holidays are just around the corner!

I love the holiday season, but I don’t like how the end-of-year holiday season tends to focus on food — all kinds of sugary, fatty, high-calorie and delectable food. Of course, I allow myself to enjoy all the amazing holiday goodies, but ever since I changed my lifestyle over 10 years ago I’ve learned to stay in control of my portion sizes.

When Enough is Enough

Keeping my portion sizes under control is something that I did NOT do during my morbidly obese years. I hate to admit this, but during those 25 years, I felt as though the holiday season was a two-month time period when I was given a “free pass” to eat as much as I wanted.

Boy has that ever changed! Now I allow myself to enjoy many of the food items offered during the holidays, but I keep control of myself. There is no “free pass” for me now — instead it is more like a “visitor’s pass” as I continuously am surrounded by all the goodies at the family gatherings, parties, celebrations and feasts.

I have learned to simply know how much is too much, and I stop eating before I hit that point.

I think the majority of us know when we hit this point; our conscience basically tells us to stop eating. I was once very good at totally ignoring my conscience — but then I realized that I had to listen to it in order to become the healthier person I wished to be.

And listening to my conscience still works today. I enjoy food and yes, I admit that I do take pleasure in a delicious holiday meal. No matter what age, gender, religion or race we are, most of us enjoy eating, right? But healthy eating take some discipline, that’s all.

When you begin to attend the upcoming holiday events, enjoy the food and focus on smaller portion sizes. Someone told me this once: “Eat like a thin person,” which is pretty simple to remember. One of my favorite quotes that continuously keeps me on track: One bite tastes the same as 20.

If you find a food difficult to resist after a bite or two, I want you to think of this: No matter how many bites you take, eventually you’ll be finished and doing something else, right? Wouldn’t you rather find something else to do after only one or two bites instead of eating a substantial amount of food, overindulging and causing you to feel guilty?

Think about that… really. Stop and think about what I just asked you. Listen to your conscience when it tells you to stop—and then STOP!

It truly is mind over matter, making the effort to truly listen to your conscience. Start practicing now and you’ll be a pro at taking smaller portion sizes once the holiday season officially arrives, which will be here before we know it!