When Your Kids Are Peer-Pressured to Eat Fast Food, Empower Them With Knowledge 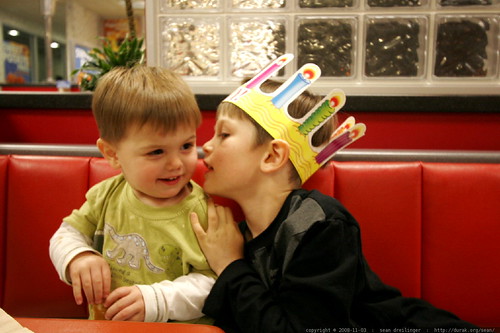 During my presentation at the first annual Women of Wyandotte Start Living Expo this past weekend, a woman asked me the following question:

“Jodi, do you have any suggestions on how to help your child make healthy meal choices, especially when it comes to eating with their peers? Many times my child will eat unhealthy items because he wishes to fit in with his friends, not wanting to bring attention to himself by informing his peers that he doesn’t want any fast food because it’s not good for him. How can my son make healthy choices without feeling as if he is going to be teased?”

“Wow.” That was my immediate reaction.

I had never really thought about this type of situation before this conversation. It occurred to me that if this is happening to this woman’s son, it most likely is happening to many children throughout our country.

Think about it: Parents (along with caregivers, daycare providers, teachers, even the media) stress to kids that they should eat food that is good for them because it helps their body grow strong and healthy. But this is not always what children want to do, especially those who may not be reminded of this advice on a daily basis. Of course many children want to eat fast food when it’s offered to them — for many kids, it just tastes better! So, what to do when a child wants to eat healthy but doesn’t want his friends to tease him because of it?

There really is no perfect answer for this as far as I can tell, but I found that when my children wanted to eat fast food with their friends, I had to be creative.

First, I didn’t tell them that they couldn’t go to the fast food restaurant or that they had better not eat anything there, because they knew better. That would have only made them want to go there more. Instead, I’d remind them to “order smart” and they knew what I meant.

Many times we would ask for the nutritional information when we would go to a favorite restaurant, and while eating our meal we would just look it over. The kids would find the highest-calorie item, along with the items including the most fat or sodium.

They’d be shocked to find items such as cheeseburgers or fried chicken sandwiches that contained almost 700 calories, which didn’t include the fries and beverage. Then they’d quickly add those calories, too and find that with just one lunch, a person could consume well over 1,200 calories … in just ONE MEAL!

Knowing that kids their age were required to keep their daily calorie content to around 1,800, they could quickly do the math and know that  each meal should be around 600 calories… but that was only if they didn’t consume one single snack throughout the day.

They knew they always had an after-school snack, and sometimes one in the evening, that totaled around 300 calories or so. That put their meals at around 500 calories per meal. They realized themselves — without their ol’ mom informing them — that they did not want to eat 1,200 calories during one fast-food meal.

Finding It On Their Own

Sure, I could have told them this myself, but they liked finding the information on their own. And yes, I had also informed them that most fast food doesn’t contain the vitamins and minerals their body needs and that fat and sodium were off the charts.

But they still wanted to have fun at these restaurants with their friends. And hey, I get it; I was once that age, too.

The key is, they knew which items — i.e. menu choices under 500 calories — they could order before they went to these places, and those were the foods they purchased. I’m pretty sure that their friends didn’t say a word, and I know that my children didn’t complain one bit! (Well, except for the fact that there weren’t enough healthy choices on most of the menus… but I have a feeling that with each day that passes, we’re getting closer to the day when there are plenty! Let’s hope so anyways.)

What ways have you found to help your kids avoid being peer-pressured to eat junky food?