Battles with the Mirror: Making the Switch from the Psychological to the Physical 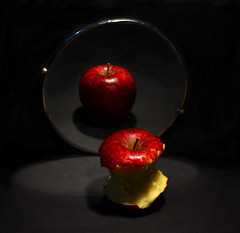 Malnutrition refers to a condition in which the body is chronically deficient in the nutrients that are essential for proper health and development. It may be long or short-lived, and can affect people of all ages.

Hunger, over a long period of time, may lead to malnutrition – but there are many other ways in which a person can become afflicted. Surprisingly, the origins of malnutrition are often not biological.

It can be. Some people look in the mirror and realize that they are noticeably underweight, or can tell based on health issues that they may be malnourished. There are others who look in the mirror and don’t see what the rest of the world sees. These people, the ones that others see as lovely and healthy, see themselves as being unattractive and obese.

Up to 24 million people of all ages and genders in the US are affected by these feelings. The bitter point of connection between all of these people is that they are all struggling with eating disorders. There are various causes of eating disorders, which include:

The reason that eating disorders are so dangerous is because with their attempts to be thin, people completely forget about what the lack of nutrients does to their bodies.

When I was in high school, I was a member of the dance team. Most of the girls were thin, but not to an unhealthy extent. There was one girl who was different from the rest. For 4 years she consistently battled anorexia nervosa, an eating disorder characterized by self-starvation, and is still struggling with it today. As I spent time with her throughout high school, I witnessed one of the saddest transformations I have ever come across.

My friend started high school as any other teenager: excited and carefree. In the beginning, she was so happy to enter into this new world. As high school continued, she gradually forgot what being carefree felt like. She began eating extremely small portions of food, exercising excessively and comparing herself to other girls at school. Every day at dance practice she would tell me how jealous she was of other girls. I couldn’t believe what I was hearing – she was, by that point, the thinnest person I had ever met.

Everyone was starting to worry about her, telling her she needed to get help and that she was crazy to think she was fat. Time went on and her refusal to admit she had a problem remained. She was eventually hospitalized – against her will – at 17 years old, as she was 5’8″ and weighed 95 pounds.

Refocusing on the Body

I believe that instead of viewing ultrathin celebrities as idols, young people should focus inward and decide how they can be their best selves. It seems to me that as time has gone on, the focus on the health of our bodies has been lost in the hype of image and appearance.

To keep yourself at minimal risk for malnutrition, pay attention to what goes on with your body. Keep an eye on your weight and if you find that you’re under the bar, consult a dietician to figure out what you need to do to be healthy. If you feel yourself shaping yourself to be “perfect,” think about what effect that will have on your health.

Always remember that the loss of a life is never justifiable by the attempts to attain the perfect body.