My Three Wishes For Your Better Health 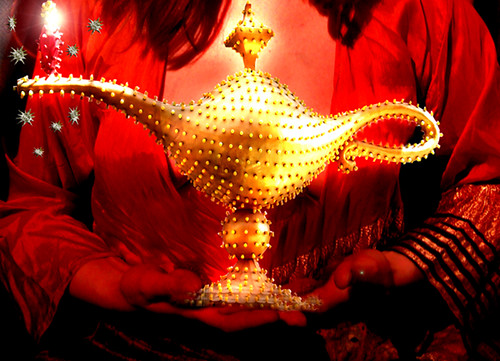 Remember being a kid and watching the television screen in awe while imagining how great it would be to find a real magic lamp, just like the ones in many of our favorite cartoons? Oh, just to be granted those three wishes by the magic genie who was hiding inside! You better believe I had my list ready just in case it ever happened to me.

First I was going to wish for all the money in the world. I thought that would be so cool to have as much money as the character from Gilligan’s Island: Thurston Howell, III. Back then he was the rich, millionaire on television who could buy anything and everything. That was a wish that wasn’t so absurd; I mean really, who doesn’t want to own a lot of cash?

Secondly I was going to ask that magic genie for a huge castle to live in; hey, after all the Walt Disney books and movies my young eyes had viewed over the years, I just knew that castle living was for me! Okay, so I wasn’t a princess but I could surely act like one if need be.

And my last wish was one that just might be a familiar wish for many of you.  When I was a young girl, it was the wish that I wanted most of all: to be skinny.

There wasn’t much more to that wish other than I just wanted it to be quick. Poof! “Jodi, you are now skinny!” Yeah – finally!  I’m not fat anymore … yipppeee!

Then I’d cry. Reality hit and I knew these things wouldn’t actually happen because there are no magic lamps to rub and genies don’t exist. But I sure wished they did.

It’s almost funny that today, I still imagine what wishes I would make if I found that magic lamp while rummaging around in an old attic. The wishes have surely changed since I realize the ones I make today are ones that CAN come true… I’ve just learned to accept that they won’t happen overnight.

First I wish for the ability to reach out to all obese individuals and give them hope!  I want them to realize that they can end their days of obesity once and for all, just like I did.

Secondly I would wish for this generation to be educated thoroughly on the IMPORTANCE of healthy living. Allow children to learn the specifics on what happens to a human body if good health is avoided.

And my last wish would be that every person, young or old – rich or poor –  either princess or pauper …  would exercise their body every day! I don’t care if it is walking, jogging, cycling, swimming, dancing or doing a few hundred jumping-jacks, just EXERCISE for at least 20 minutes! I know that daily exercise makes a person feel better, raises their self esteem and increases their energy level! Daily exercise decreases the risks of numerous health issues, increases your heart & lung capacity and keeps weight under control! Basically, exercising daily will cause EVERYONE to be happier!

I look at it this way:  if you’re happier, then I’m happier – and THAT is a wish that I’m sure my genie won’t have a problem with granting! Now if only I can find that magic lamp…..